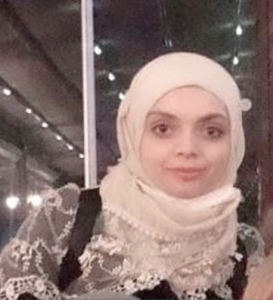 Noha was currently a law student, born in the city of Hama in 1985, who was unable to complete her studies when she got married in the second year. Also, because in the same year she had to move when the revolution started in 2011 to reside in the northern Hama countryside. But then as a result of the constant bombardment, she fled again with her family to the southern countryside of Idlib, also due to the security pursuit of her husband, and remained there four years moving from one place to another.

Suddenly Noha’s life was turned upside down when her husband was killed in a Russian air strikes on Idlib central court. After his death, she stayed for two years in the southern countryside of Idlib, but the constant bombing, repeated raids of the Russian occupation, and the Assad air force on the villages of Idlib forced her to flee fearing for her children. She headed for Turkey. The attempt was very difficult, especially with four children, and upon entering Turkey, her financial conditions were very difficult. Her psychological state was also bad. She felt all these circumstances left her a broken person. She found herself alone with her four children without relatives or grandparent parents. She initially settled in the beginning in a small inn, where she stayed for a month and then was able to get to a small apartment, a safe home for her children. She stayed for a whole year without work or study in a depressed psychological state and non-existent social relationships.

Noha, one day, after that year, received an offer to enter a kindergarten course. At that moment, Noha was ready to accept any training or job opportunity that came. Noha missed her studies, but she wanted to continue her life, given her responsibilities as a mother. Given her dedication to her children, and her dreams for a better life for them, life began to change for Noha. Before moving to Turkey, it had never occurred to her that she would work. But the kindergarten training course that Noha followed gave her a new hope of getting a job and a new direction in her life. However, the hours were difficult given her own responsibilities at home.

One day, her friends told her about an interesting, life-changing course by Tastakel organization. She immediately decided to enroll. It was during the training that the spirit of the work-loving, confident and goal-oriented person began to appear. The presence of well-informed, educated and professional trainers and lecturers at Tastakel had a great impact on Noha.  She enjoyed most subjects, but the subjects of negotiations and psychological support left the largest impact on her life. These classes raised the spirit of work ethic and self-confidence in her, as she felt that she was able to change her life and shift her mental state.

Noha’s life changed after this. She went back to school to study and pursue her educational dreams. Noha registered at the Institute for Sharia Sciences in Riyhanli (Theology and Islamic Law). She also managed to obtain a scholarship to study political science at Rushd University. She was keen to continue and hone her skills and build her capacities. Being with Tastakel, for Noha, was a major turning point in her life. She did not stop when she obtained a certificate from George Mason University. Due to her dedication and attitude, she was nominated to attend the advanced class courses. After that, she was chosen by Tastakel’s administration to be the assistant coordinator for the Amman Center and Raqqa.

Noha was happy when she became a supervisor. She felt this was a new step in her life and career. She appreciated being supported by the larger team. “It was an unspeakable feeling,” Noha says, “I cannot forget all the fatigue of the past years. I truly wish Tastakel continuous success. They became my new family. I hope we can grow together. The training by Tastakel has formed me positively and brought out my eager personality; where yet again I have been able to prove my existence. I am now able to continue even when there are children at home,” she says. When the working groups were formed in the advanced class, Noha chose the mediation group. “We worked on empowering ourselves using this material and we began writing a booklet on foundations and principles. Tastakel gave me confidence in myself and in my ability to be present and active in society. It is my larger family and I am happy to be one of its members.”

Noha believes that being with Tastakel awakened her to her own inner voice, which made her feel centered and calm. All this had a great effect in transforming Noha from a desperate and exhausted mother to a person who is motivated and thinking of tomorrow and searching for beauty in the simplest things. In conclusion, Tastakel supported Noha to complete her university studies and provided recommendations to the university administration to be accepted. But mostly it gave her an opportunity to reconcile with herself, discovering that she was not a victim, but a productive individual, capable of proving her abilities. Noha slowly and surely is emergig as an influential and distinguished person in her community.